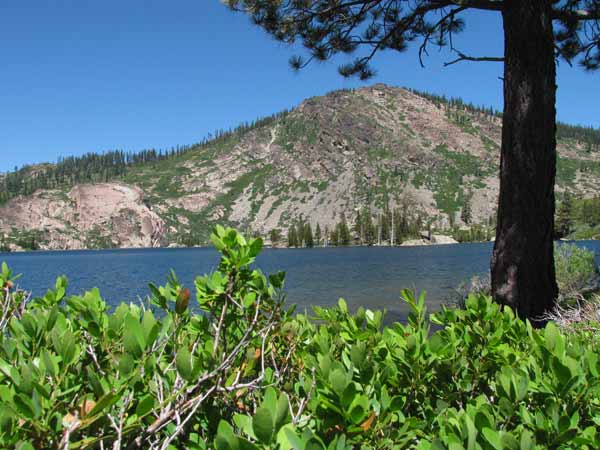 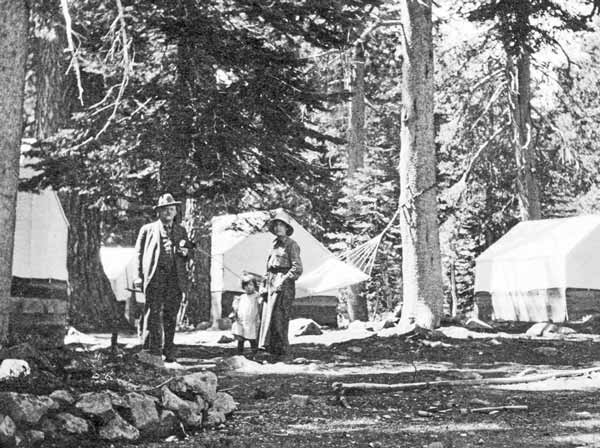 Elwell Lakes Lodge was started in 1920 by William Drew, a resident of Burlingame, California. He had been visiting the area in 1919 with a fishing buddy and was asked to run Lakes Center Lodge while the widow of the owner was away.  He liked the area so well that the next year he began building and operating nearby a tent cabin facility. Three meals a day, hot water in a shower house, and mens and womens outhouses were offered as conveniences to those who wished to not camp on the ground.  People arrived at the lodge by train, coming into the station at Blairsden and then driven by ‘car stage’ to the lodge, about a 12 mile ride on a dirt road. Various events such as costume parties, dances, and campfires kept the guests entertained in the evening after a day of hiking, fishing, or horseback riding.  By the mid-twenties a large recreation hall and dining hall were completed and then the guests could gather around the fireplace at night after a hearty meal in the building on the hill.  When the Depression came, people did not frequent the lodges as much, though the resorts continued to operate.  Board cabins began to be built in the 1930’s to appeal to those who wished to escape the bugs and other animals.  By the 1960’s people tended to camp more, so Mr. Drew’s daughter, Miriam Childs, who now owned the lodge, changed the lodge to housekeeping cabins to appeal to a new clientele.  By the late 1980’s, the Lakes Basin had been rediscovered by the public, and the lodges were booming once again.  Still owned and operated by the original family, Elwell Lakes Lodge now consists of ten cabins and three tent cabins.  The two big buildings, even after more than 100 years, reflect the craftsmanship of Mr. Drew and his vision of a summer resort in the mountains of Plumas National Forest. 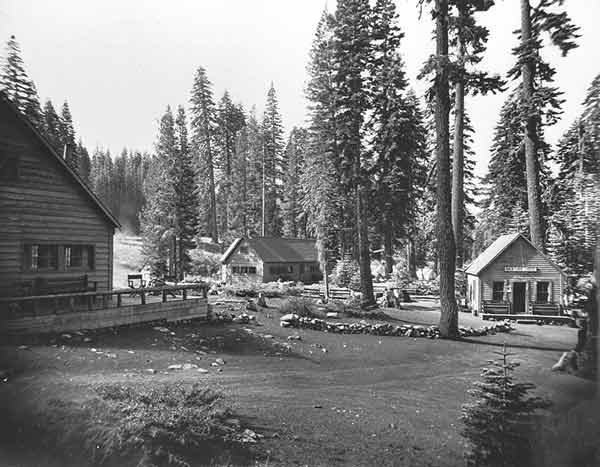 The first permit was issued in 1912 to Mac and Mava Machomich.  The lodge was built to accommodate guests who wished to fish Gold Lake and nearby lakes, but didn’t want to “rough it” by camping. Visitors came to the area by train to Blairsden then by horse and buggy and motorized car.  In 1925 the main lodge burned to the ground, but it was reconstructed the next year.  In the late 1940’s disaster hit again, when a tree toppled into the Recreation Hall. Lodge owners are never daunted by problems and the Machomichs built it again.  In 1942,the lodge had a recreation hall, dining hall, a store, a generator cabin, eight cabins, and twenty-one tent cabins.  The Machomichs, due to age and health, sold the resort in 1953 to Dorothy McClenaghan, a school teacher in Berkeley, California.  She renovated cabins with newer facilities and removed older tent cabins.  She employed seasonal help but did a lot of the work herself.  She did much of the cooking, carpentry, reservations, and even repaired the ‘farmer phone line’ each year with Mr. Drew from Elwell Lakes Lodge.  Ms. McClenaghan was an industrious entrepreneur who thought nothing of oiling the interior walls of her buildings each year by herself before opening for the summer.  In 1987 she had to part with the lodge because of poor health, selling to Pete and Ann Thill of Graeagle, California.  They rebuilt the clientele, appealing to families who wished to hike, fish, boat, and mountain bike in the area. The Thills strived to retain the style of earlier days with breakfast and dinner served in the dining room and campfires each night.  They catered as well to outside dinner guests who wished to experience dining in an old-fashioned lodge.  In 2002, the John Barker family of Portola purchased the lodge and operated it for 15 years, updating and improving the facility each year getting the lodge to modern guests preferences. Today, Gold Lake Lodge continues its operation of  providing quality summer recreation to guests of the Lakes Basin area with the Remlinger family as new owners starting in 2017. 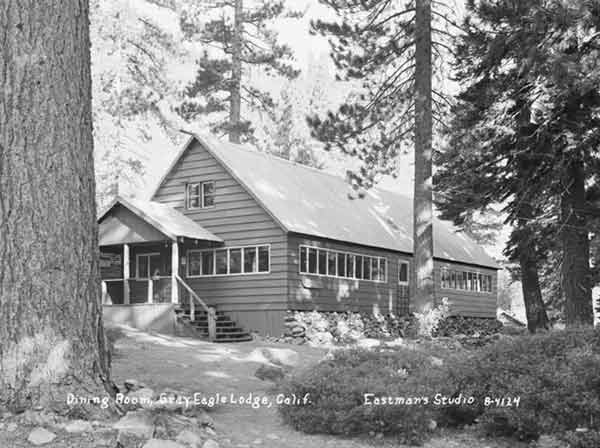 Fenton Zehner was the first permittee of Gray Eagle Lodge.  He built it in 1924 along Gray Eagle Creek, using the creek for hydroelectric power.  His lodge consisted of two substantial buildings - one was the dining room and the other the recreation hall - and a number of cabins and tent cabins. The summer of 1945 Thomas Burness operated the lodge. Zehner sold to Bob Goodale and Robert Ballachey of Lafayette, California in the 1950’s.  By 1958, when it sold again to Frank and Genevieve Hunter, the lodge had a restaurant, hotel and cabins, store, boat and horse rental, and liquor sales.  The Hunters did a sizable amount of restoration and renovation, finishing it for a grand opening in May 1962.  Business was good until the building of the Gold Lake Forest Highway, causing access problems.  They had to close one summer because of road construction, but used the time to build two more cabins, making the total eighteen.  Bill Johnson of San Jose purchased the lodge in 1971 and ran it for 10 years.  Snow and weather were tough on Gray Eagle Lodge.  In 1974, a large tree went through the Recreation Hall and in 1983 the heavy snows collapsed the Dining Hall and part of the Recreation Hall.  A log building now contains the dining and recreation areas.  Sam and Grace Smith, former proprietors of a lodge in Oregon, bought the lodge in 1984. Today, their son Bret  continues the tradition by running the family business. The lodge has 20 cabins and two guest rooms and boasts a superior restaurant known as The Firewoods which serves hearty mountain cuisine to their guests and outside visitors.  After dinner, all are welcomed around the campfire to have s’mores, a nightly activity. Today, Gray Eagle Lodge prides itself in providing a traditional vacation - no need to cook or drive and no phones or television in the cabin  - just like in the 1920’s when visitors first came to the Lakes Basin. 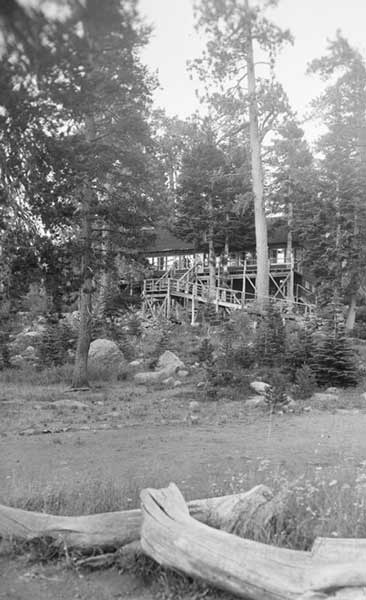 The original permit for Lakes Center Lodge was issued to Gayle and Ruby Green of Blairsden, California in 1912.  At first, the lodge consisted of a main lodge and several adjoining buildings with a dozen or so tent platforms.  Three meals a day were served to the guests at the rate of $2.50 per day.  Green operated a stage between Sierra City and Blairsden, picking up guests for the lodge at the train and supplies for himself and others.  Green and Green operated the resort until 1947 when it was sold to Thomas Sheridan and Francis Murphy from Oakland, California.  They and their families added the homey touch to the lodge, with other families finding this was a place for all ages.  Evening campfires with sing-a-longs and volleyball games with players from the campground and other lodges added the element of fun to a visitor’s stay. Meals were served in a two-story Dining Hall overlooking Grassy Lake and people stayed in tent cabins or cabins.  In the 1960’s Bill Taylor subleased the lodge from Sheridan and added his touch with new cabins with rock foundations and a round geodesic dome recreation hall. This building lasted two winters before the heavy snows collapsed it.  By the 1970’s certain maintenance and improvements were required by the Forest Service.  Dan Sheridan, the current owner, could not complete them, so the lodge and all the buildings had to be removed by the permittee in 1976 and 1977. Today some of the rock foundations can be seen amid the campsites in the Lakes Basin Campground, a reminder of bygone days. 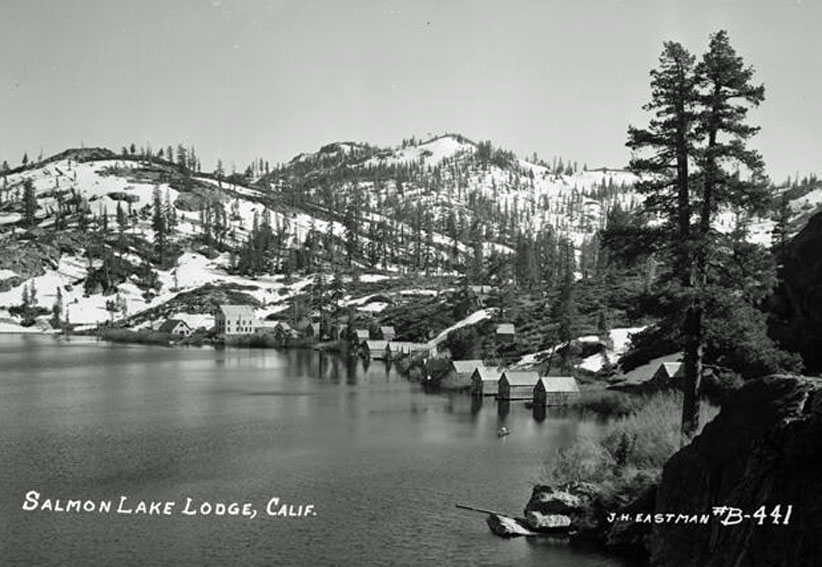 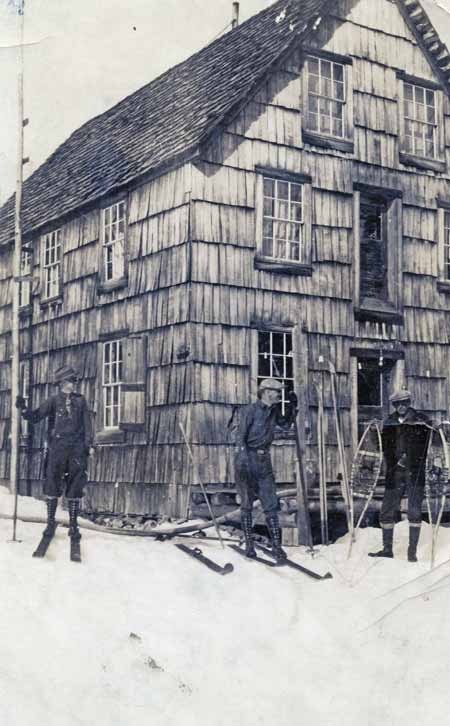 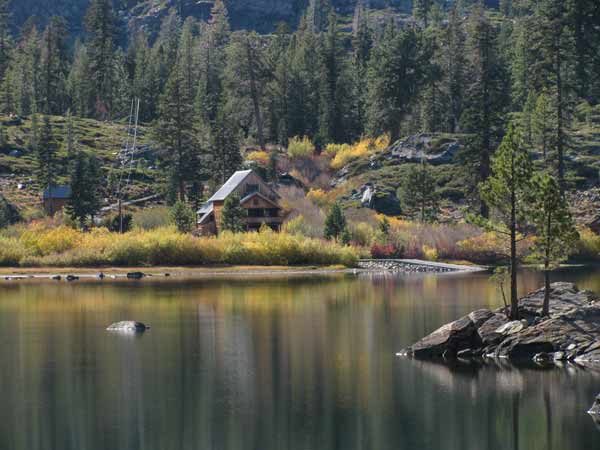 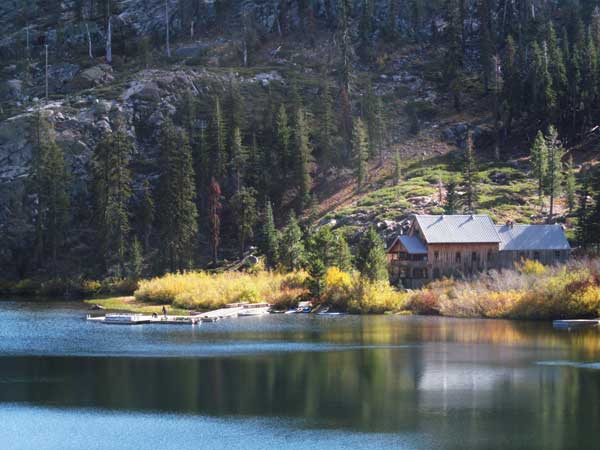 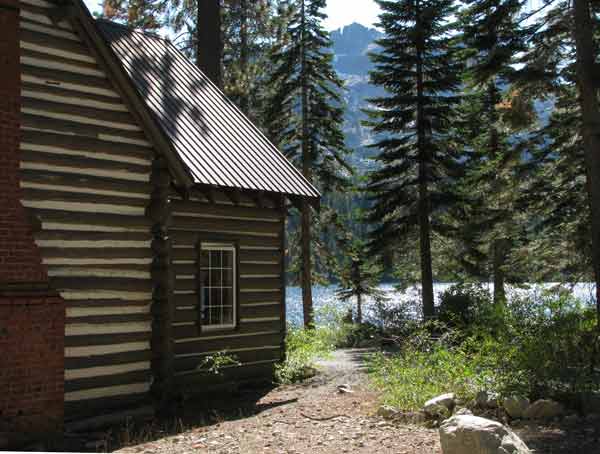 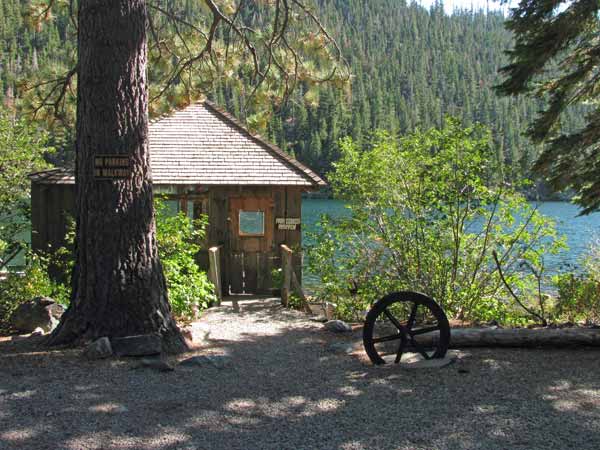 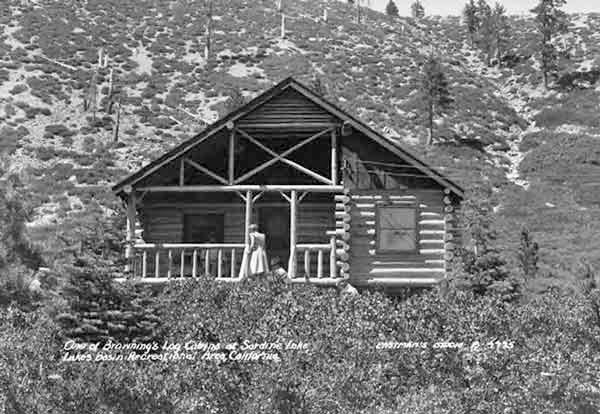 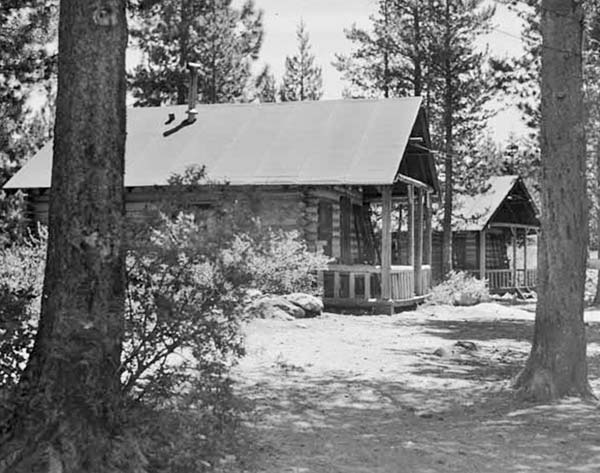 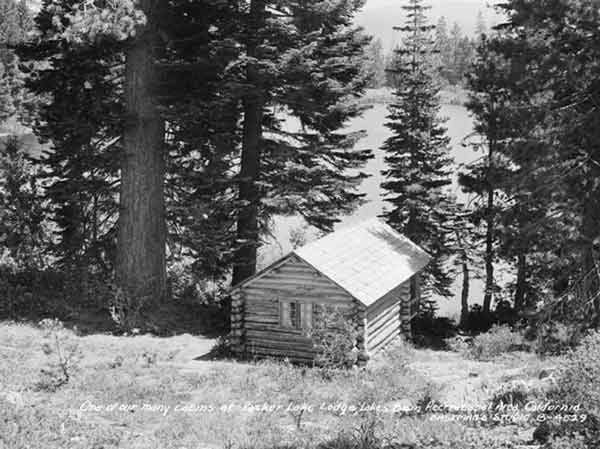 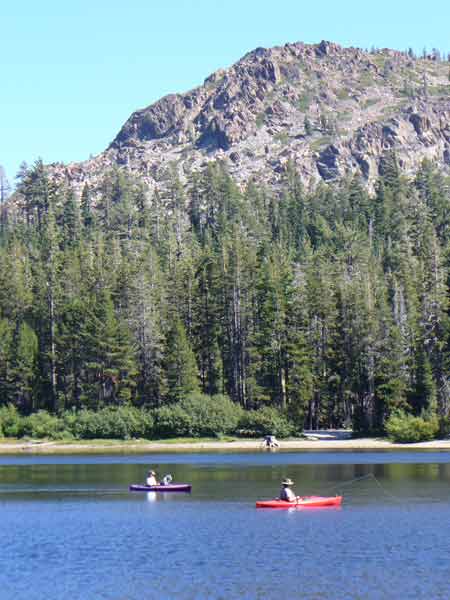 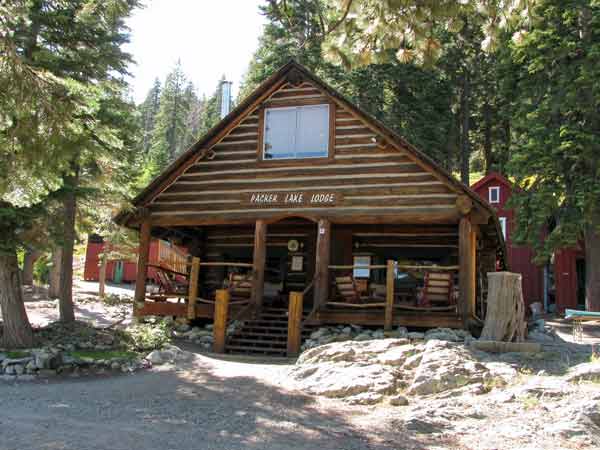 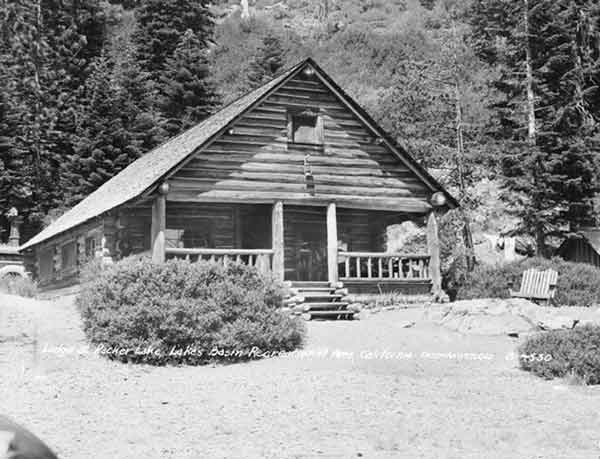 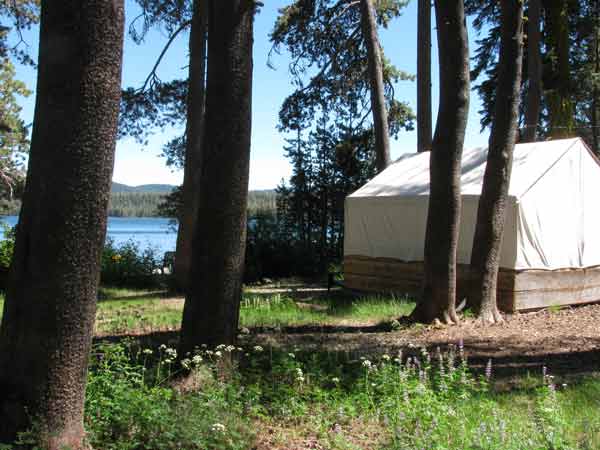 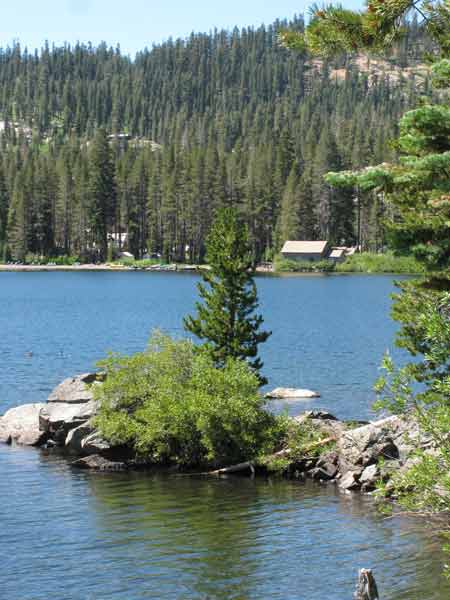 Distant view of the main lodge 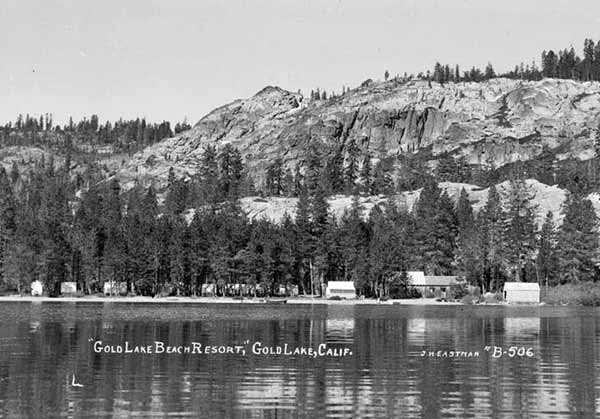 Photo of the lodge facility 1940's 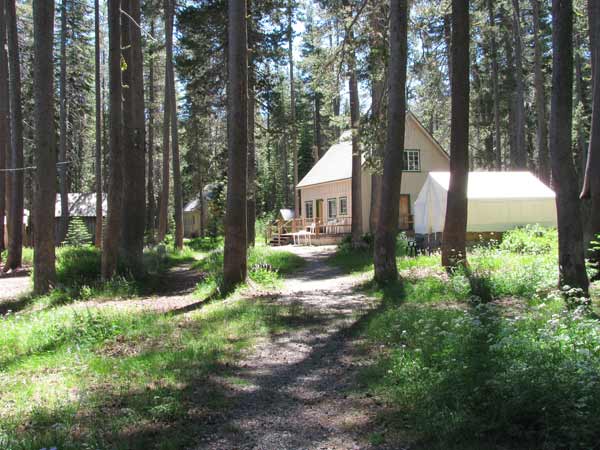 Large cabin and tent cabin at the lodge

Other Former Camps in the Lakes Basin
‍ 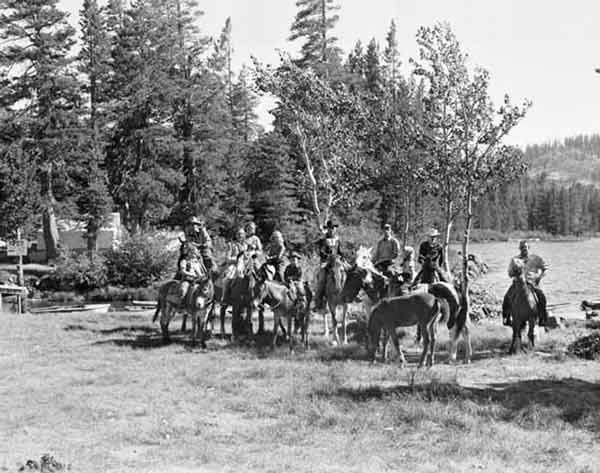 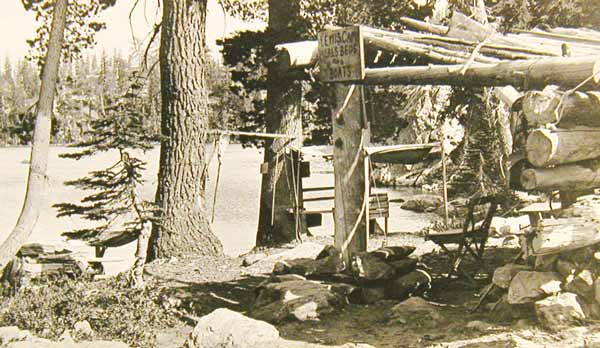 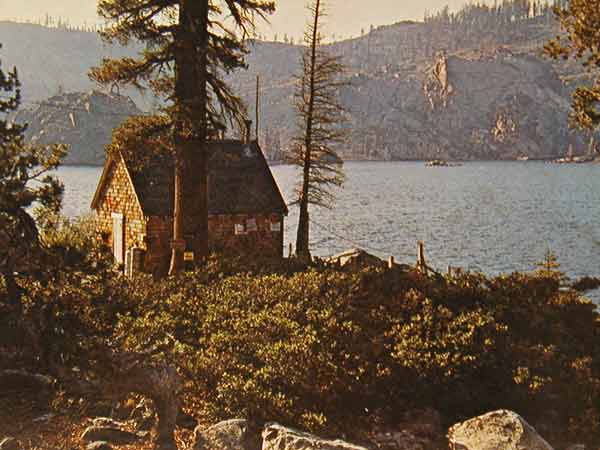 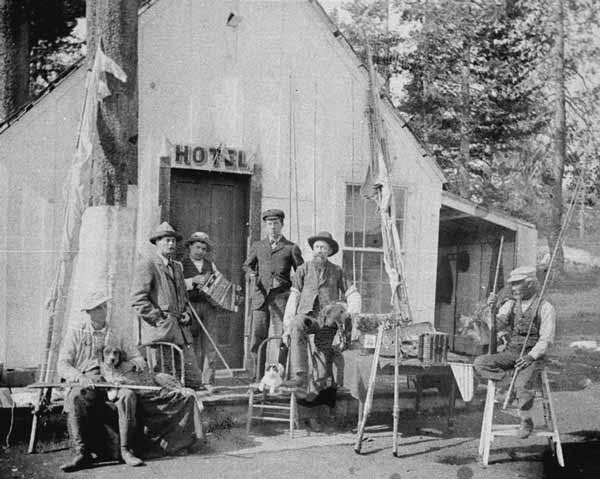